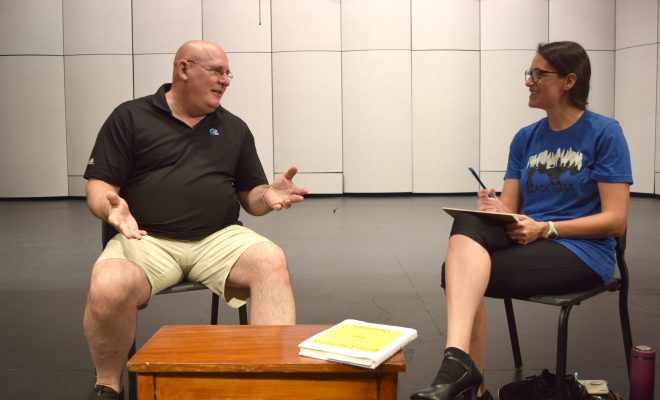 Kary Swiontek of Jackson plays Joan, while Dave Trippett of Jonesville portrays Nick, a New York Fire captain in the powerful one-act play, The Guys. A portion of the proceeds from the play, which will be performed this weekend, will go to the Jackson County Fire Chiefs Association.

The loss of so many brave firefighters and first responders on September 11, 2001, is well chronicled, as the country mourned together after the tragic event.

But who were those guys, really?

That is what Center Stage Jackson will be conveying this weekend as the community theatre group presents “The Guys,” a two-person play depicting the tragedy, sadness and resiliency of those who were personally involved in the world-changing event.

The play unfolds less than two weeks after the September 11 attacks, when New Yorkers were still in shock. Paralyzed by grief and unable to put his thoughts into words, Nick, a fire captain, seeks out the help of a writer named Joan to compose eulogies for the colleagues and friends he lost in the catastrophic event. Nick and Joan spend an afternoon together, recalling the fallen men by recounting their virtues and their foibles and fashioning the stories into memorials of words.

In the process, Nick and Joan discover the possibilities of friendship in each other and their shared love for the unconquerable spirit of the city. As they make their way through the emotional landscape of grief, they draw on humor, tango, the appreciation of craft in all its forms – and the enduring bonds of common humanity.

The Guys is based on a true story.

So . . . how does one memorize an hour and a half long play? “We don’t know yet,” deadpanned Trippett, but director Lisa Cryderman quickly notes that the two are well prepared for opening night. In fact, this will be Trippett’s third time performing the play, while Swiontek is having her second go-around.

“The first time I did it was as a staged reading, but this is so much more powerful,” said Trippett.

“It is a conversation, it is one act,” noted Cryderman, which lasts about an hour and a half.

“They bring these men to life for us. There is happiness and there are light stories and some fun, and of course, there is some heartache and some sadness.”

Swiontek said she loves how the characters evolve over the course of their visit. “He arrives broken and struggling, and she is the strong one,” said Swiontek. As a hard-bitten reporter, Joan has seen it all, but by the end of the play, she is kind of wilted from all the pain, while the Fire Chief seems to draw from her strength. 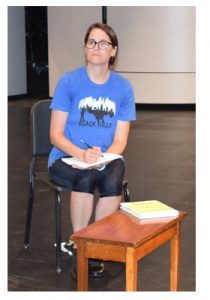 The cast not only performed the roles before, but they even did a little extra homework for the 20th anniversary of 9/11. “We visited the Jackson City Fire Department here in town, and it gives you a picture of who these guys were. They were real human beings who had mothers and fathers,” said Kary.

The play was written by Ann Nelson.

The Guys will be performed this Friday, September 10 and Saturday, September 11 at 7 p.m. and Sunday, September 12 at 3 p.m. at the Michigan Theatre, 124 N. Mechanic Street in Jackson. Tickets can be purchased online at MichiganTheatre.org.

A portion of the proceeds from the play will go to the Jackson County Fire Chiefs Association.

Who is Center Stage Jackson?

Center Stage Jackson was formed in 2000-2001 following the merger of the Clark Lake Players and the Jackson Civic Theater.

The Jackson Civic Theater was formed in the early 1960s by the Jackson City Recreation Department. Its first plays were staged at City Hall. In 1966, the group moved to Stone Village on Probert Road before finally landing at the JCC Potter Center. JCT productions run during the school year.