The harvest is bountiful! Curtis Farm Market has ‘good year’ 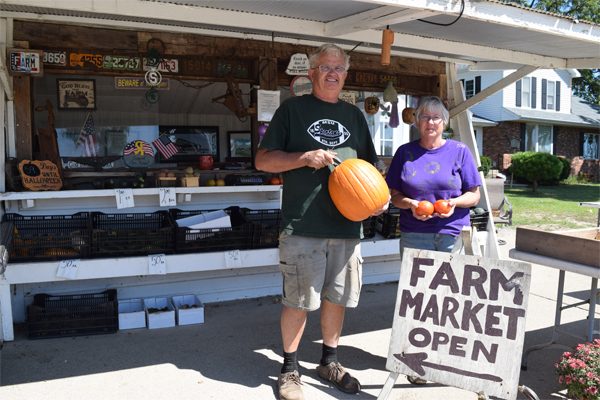 Pumpkins and tomatoes, displayed here by Dennis and Dianne Curtis, are just a couple of the many fruits and vegetables recently harvested and available at Curtis Farm Market.

Story and photos By John Hummer

Looking for some nice fresh vegetables and fruits? Look no further than Curtis Farm Market on Austin Road in Napoleon Township. The farm has a bountiful harvest from a productive growing season to share with all of its customers.

“Overall, it’s been a good year,” said co-owner Dennis Curtis of this year’s growing season. A dry May gave way to a rainy June which got crops off and growing. Though it is dry again with little rain of late, he says that is not affecting the growth of the later crops such as pumpkins and watermelons. “Right now, we’ve got a lot of watermelons and cantaloupes,” he said. “The watermelons are heavy and juicy and bright red.” (More below) 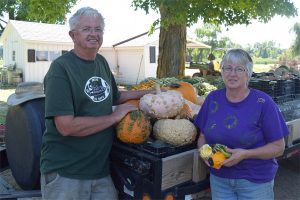 Dennis Curtis displays some of the odd varieties of pumpkins available, including peanut pumpkins, while Dianne Curtis holds a few gourds available as of fall favorites at Curtis Farm Market.

Tomatoes are also in their prime right now. “They were slow getting started,” Curtis noted. Cucumbers are just about all harvested. “They did good – they liked the rain.”

Fall squash of all varieties is ripe, picked, and ready to go. Contrary to tomatoes, the squash yield is early and bountiful this year. Pumpkins are also turning orange (or in some cases other colors, depending on the variety) with some already harvested and many more almost ready. “They’re a couple, three weeks early,” Curtis said, adding that the hot August weather is the cause for the early pumpkin harvest. (More below) 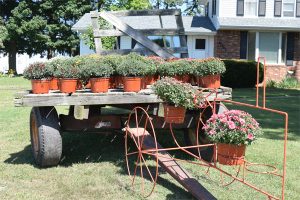 A wagon full of mums, with many colors to choose from, are ready for purchase at Curtis Farm Market on Austin Road in Napoleon Township.

Curtis Farm Market is also known for its plentiful supply of mums. Though, he says, “The mums would like a drink of water. They’ve been blossoming the last couple of weeks and will continue through the middle of October,” he stated.

Sweet corn has also had a good year but has sold out fast – there is not much left until one last patch they have is ready to harvest, which should be around this coming weekend. Curtis said the bad storm of a couple of weeks ago knocked it down and has made it hard to pick.

Curtis Farm Market is open daily from 11 a.m. to 6 p.m. through Halloween. For more information, find them on Facebook.