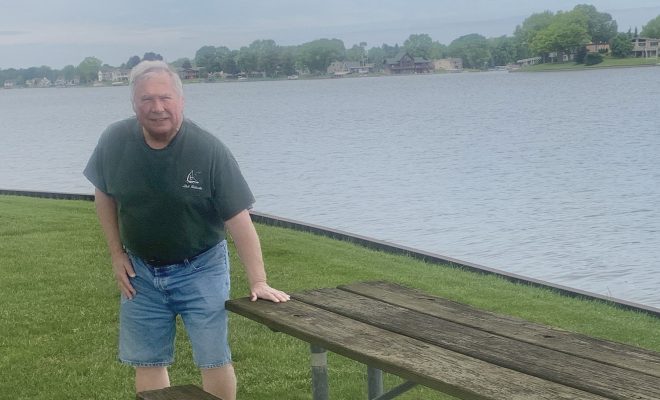 Tom Crampton, president of the Lake Columbia Property Owners Association, has the organization heading in a positive direction.

One of the iconic lakes of the Irish Hills area is Lake Columbia – a man-made lake that came into existence when farmland was transposed into the lake on Nov. 10, 1961.

The dam on Lake Columbia was constructed in July of 1961 in order to stop the flow of Goose Creek. Today, the drainage area of Lake Columbia is 25,000 square acres which drains into both Jackson and Hillsdale counties.

This large lake with private homes around it is looked after by the Lake Columbia Property Owners Association. Tom Crampton is the new president of the association as of May 2022.

“The association is there to service the members,” he said. “We’re calling it a ‘white glove service’. In other words, we make sure the members have access to the lake, all the amenities they’re looking for in their stay here, and the parks are in good shape. That’s why some people come here. That’s why I came here in 2003.”

If a member owns property on Lake Columbia, they must belong to the LCPOA. Crampton says there are somewhere between 1,700 and 1,800 members. “There has been a lot of turnovers the last couple of years with the sale of houses in the market that went through a storm – we went through it, too,” he said.

Check out this upcoming auction: 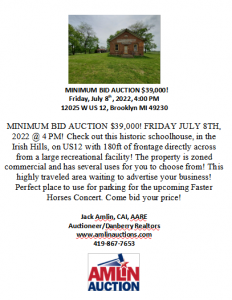 There are 2,200 lots within the boundaries of Lake Columbia. He noted that some members own multiple lots. “Your first lot is the only one you pay full price for being in the association,” he stated.

Crampton says there are less than 10 lots that are grandfathered in from the original flooding in 1961 that created the lake whose owners need not belong to the association.

The LCPOA has monthly meetings that members can attend. Others who can attend are prospective lot buyers or others who have a valid reason to attend, Crampton noted.

The organization has a board consisting of nine directors, one representing most sections, or shores, of the lake. A few shores are combined to create one director section. “Each one of those [sections] elects a director,” explained Crampton. “It’s on a rotation basis. Every year, three of the directors are up for election. Over a three-year period, all nine are voted upon again. It could be the same one returning, it could be a different one.” He added that there are no term limits on the board, so current directors can be reelected. They are not paid.

The board officers consist of a president (Crampton), vice president, treasurer, and secretary. The officers are elected for one year at a time. “We’ve got some younger people on the board now, which is really great,” he said. “The lake is kind of turning over in age groups. The houses that sold here in the last couple of years – younger people have bought those and moved in. They’ve got kids, or they’re thinking of having kids. That’s why we’ve got to protect and improve this lake – for those kids and for their kids.”

Crampton says the LCPOA has not gotten politically involved in any issues in his five years on the board. “We have a lot of conversation with the township because of our building codes,” he notes. “We have a Deed of Restrictions code under the association and we work together on that. Each one of the shores is designated what type of build you can do, and how big the house has to be. It’s all single dwelling here.” Just like any other development, plans for new buildings or additions are submitted to the township for approval under the township’s zoning ordinances.

Within the LCPOA, Crampton acknowledged there will be differences of opinion on some issues. “There are going to be decisions that are going to have to be made – with 1,700-plus people, everybody isn’t going to agree,” he said, adding that having good supporting information, being transparent in the process, and seeking compromise is key. “If the board doesn’t approach it in that manner, we can’t expect our members to approach it in that manner,” Crampton stated. He added that members have a right to voice their opinions in a civil, courteous, dignified, and respectful manner.

The association also works together with the township police and fire departments. “They have access to our ramps for emergencies and stuff,” Crampton explains. “It’s all a cooperative-type deal.”

Crampton noted that there is a full-time office manager and some new part-time staff at the LCPOA office. “They want to give the best service possible to the membership,” he says. “We’ve got a team that’s really setting us up to be successful.”

However, a large share of work is accomplished by member volunteers through LCPOA committees, which may or may not include board members. There is a Building Control Committee that signs off on any building taking place, including houses, additions, docks, decks, etc. that all goes through the LCPOA deed restriction process. From there, any permits for such structures go to Columbia Township.

A Parks Committee is charged with maintaining the many parks around the lake, however, big jobs like mowing and putting docks and buoys in are contracted out. There is also a newly-formed Financial Committee to keep the organization’s accounting in order.

The organization also has an Activities Committee that coordinates some fun things for members in which to participate. One of the activities the LCPOA hosts for its members is an annual picnic. They also hold fishing tournaments. The committee relies on members to step up and volunteer to help with events.

“We’re working on some other committees in some other areas that we think need attention and we need input from the membership to make sure we’re making the right choices on what we’re doing,” Crampton noted.

Most importantly, Crampton says friendships, camaraderie, and common goals are what the LCPOA is all about. His focus is on charting the organization on a positive course.