What image should be on Jackson’s seal, as city officials go all-out-woke? 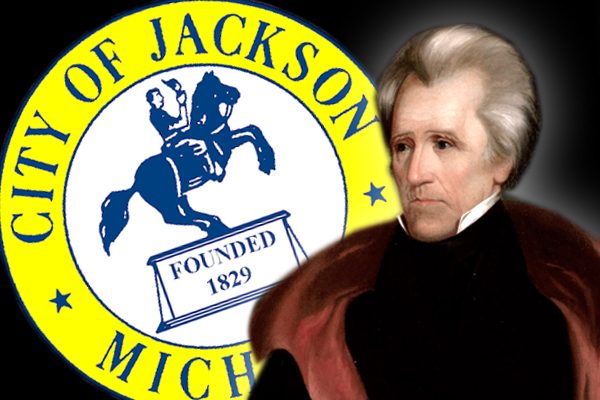 Above: Andrew Jackson is shown with the official seal of the City of Jackson, Michigan, in the background. City officials want to remove Jackson’s image from the seal.

The Back Page is an opinion column published regularly in The Exponent. To subscribe to the newspaper or learn more, click here.

Jackson officials are in the process of redesigning their city seal, and there will be no depictions of Andrew Jackson allowed on the new, politically correct one. Our seventh president has become persona non grata in the town that was named after him.

According to a press release, “Andrew Jackson was a slave holder who signed the Indian Removal Act of 1830, which led to the forced relocation of Native Americans along the ‘Trail of Tears’. Because of this, some have called for the removal of the D.C. statue that the city seal is based on.”

Mayor Derek Dobies says he’d like to see a seal that is more specific to Jackson, Michigan. “A community with so much pride in its rich history and forward momentum deserves a better city seal,” Dobies said.

All of this begs the question, if Andrew Jackson is out, who, or what, should take his place in representing the fair city of Jackson?

What is Jackson really all about?

There are lots of options. For instance, if Dobies and his fellow public servants on city council are serious about accurately recording history, and not merely pulling off a political stunt, they might consider incorporating an oak tree into their design. There are a couple of reasons for this.

First, there is a little bit of a tree hugger in all of us, and Jackson has a lot of oak trees.

Another reason is that it would pay homage to the party that was born in Jackson, with the primary purpose of freeing slaves…you know, from Democrats like Andrew Jackson.

If the council wants to stay away from politics, they might consider putting a pair of Coney dogs on their seal, with an order of fries in the background. Some claim that the Coney originated in Jackson, and even if it didn’t, the town has served up some of the best dogs in our region for generations. (More below)

Hungry for a local news and opinions? Consider subscribing by clicking below.

If council thinks hot dogs don’t make for a dignified seal and want to go for a more dramatic look, they could put a man peering out from behind bars on their new city seal. As home to the first state prison, Jackson is known by many around the state as a place where bad people are sent to do time. They could even coin the phrase “Jackson, where people come for life.”

Of course, that probably wouldn’t pass the chamber of commerce test, and since Jackson is a working class town full of good people at heart, council might consider putting an image of a working man on their seal…but then, what kind of man? Some on this socially-sensitive council would surely want a working woman. And if it were a black woman, some would want a white one. And if she were too feminine, others would want her transitioning, you know, butch her up a little, to be all inclusive. No one said being woke is easy. Perhaps it would be best to stay away from putting the image of people on the seal altogether. Glorifying people is tricky business, we are learning, as the modern move to rid the world of all images of our sinful fathers from the public square attests.

This doesn’t only apply to historical figures like Andrew Jackson and Robert E. Lee, either. Joe Paterno’s statue was taken down at State College in Pennsylvania. Iconoclasts in Ann Arbor are eyeing Bo Schembechler’s statue at Michigan Stadium, after reports that the long-time coach knew about the growing sex scandal by Dr. Robert Anderson.

It seems that no one is perfect.

Ironically, being imperfect is one thing all of us, black or white, man or woman, young or old, have in common. So if Jackson city officials want to charge into the brave new world with a seal that erases our history, they had better stick with hot dogs or oak trees on their new seal. And while they are at it, they may want to consider changing the name of the town as well, if they find Andrew Jackson so offensive.

It might even be kind of funny, if it wasn’t so incredibly sad.