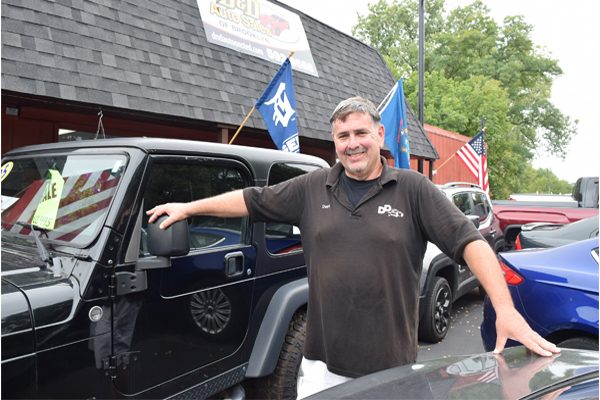 The court sided with the township, denying the use of the property as a car lot. Dean Gassert of D&D Auto posed for this photo just after being told his new dealership was out of zoning compliance by Columbia Township.

Friday, April 29, was a tough day in court for businessman Dean Gassert.

Judge Richard LaFlamme sided with both Columbia Township and Brooklyn businessman Tom Knutson in a case that was all about whether or not the property at 9947 Brooklyn Road is properly zoned to allow the operation of a used car business. Operation of car sales lot is allowed under C-2 zoning, it is not allowed under C-1.

Gassert, of Onsted, purchased the property in December of 2018 with plans of fixing up the dilapidated building, improving the lot, and opening a business to sell used automobiles.

Problems arose for Gassert’s operation on Sept. 30, 2019, at a special township meeting. That’s when Columbia Township officials voted to “bring the property at 9947 Brooklyn Road into compliance” with its zoning ordinance, which specifies that the property is zoned C-1 and does not allow for the sale of automobiles. That decision, in effect, legally prevented D & D Auto from keeping its doors open after he had put untold thousands of dollars into the property.

Gassert noted at the time that he had been given a verbal go-ahead by Township Supervisor Bob Elrod. Gassert approached Elrod in early 2019 asking if the property was zoned properly and to see what he needed to do to get the business open.

“Bob’s exact words were ‘Go ahead,’” said Gassert in an Exponent interview on Sept. 12 at his building. “I asked them. I did everything they said. And I worked hard on this building, and I am proud of it. This was a craphole before, and now it is something nice.” (more below) 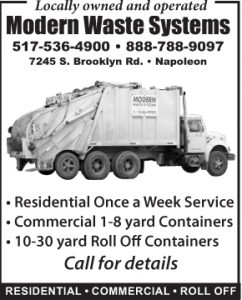 In an Exponent telephone conversation with Elrod in late 2019, the supervisor agreed that he told Gassert to move forward with the project. When asked why Elrod stated that he remembered that the zoning had been changed from Ag-1 to C-2 in 2008 and that he had meeting minutes backing up his claim.

However, Elrod, who died in September of 2021, did not have the authority to give Gassert the green light, the judge said, and it appears that the meeting minutes he referred to were either incorrect or his memory of the zoning change was wrong.

The zoning map, which is considered the legal document regarding zoning, was changed in 2008 from AG-1 to C-1, never to C-2.

While this may seem a technicality, it is an important one, and Friday Judge LaFlamme dismissed the claims that Gassert made against the township as being without merit, meaning that a car lot cannot be legally operated from the site.

The judge called it “unfortunate” that Elrod may have misled Gassert on how the property was zoned but noted that a township official can’t bind the township with such a statement. (more below)

In a separate-but-related case, Gassert filed a claim of slander against Brooklyn businessman Tom  Knutson for a statement he made with respect to alleged contamination of the Gassert property. The Knutsons own property adjacent to 9947 Brooklyn Road. That case was dismissed as well, as the judge determined that Knutson had broken no laws in stating that the property is contaminated. He indicated that there was a qualified privilege for Knutson to make comments at a public hearing that pertained to a property that was the subject of that hearing. What Knutson said was within the scope of the subject property, the judge ruled.

Knutson said Monday that he wishes Gassert ‘Nothing but the best,’ and said he wouldn’t mind seeing him open shop in the former Irish Hills Ford building, which is now for sale.

“The judge did the right thing. The rules were clearly on our side,” said Knutson, adding that it all came down to the zoning map. “His lawsuit should be against his realtor, not us or the township,” said Knutson. (more below) 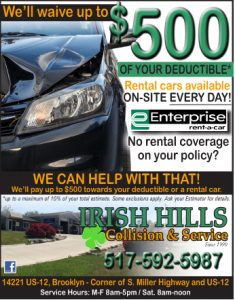 Gassert says that his health has suffered from the stress the case has caused. While Gassert was not at Friday’s ruling, he spoke extensively with the Exponent three weeks ago, saying that he believes he has been treated unfairly since day one. “My reputation has been put through the wringer. You just can’t do this to somebody. This is just wrong,” said Gassert, saying that he felt that the special meeting was not even legal. “Let’s be honest about it. The township wouldn’t even have pursued this if it wasn’t for Knutson. We took a dilapidated building . . . there were dangerous [things] going on there. We cleaned it up and made it presentable. In your mind, is that right?”

In a conversation with Columbia Township Supervisor Barry Marsh, who was the acting clerk and voted to pursue enforcing the ordinance at the special meeting, Marsh said that Knutson had “absolutely nothing to do” with the decision to enforce its ordinance.

“The township has an obligation to uphold its zoning ordinances equally, no matter who complains,” said Marsh.

When asked how much the township had spent on legal fees for the case, Marsh estimated the expenses to be a little more than $13,000, adding that it would have cost more, but insurance covered the primary attorney’s fees.

Gassert’s attorney, Robert Zawideh, said they would appeal the decision. 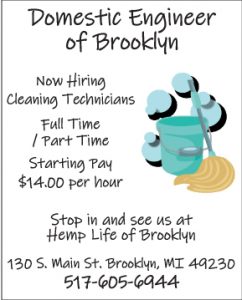